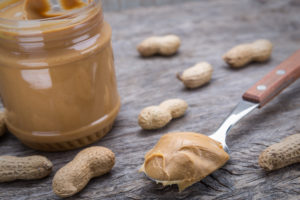 Peanuts can be incredibly dangerous. Even the smallest fragment can kill an allergic person if they come in contact with it. These reactions are far from consistent. One time, you can have just an itchy throat, and the next, your throat completely closes up.

Unfortunately, there is no cure for these allergies. The best way to deal with them is by avoiding peanuts altogether or injecting a syringe of epinephrine (commonly referred to as an EpiPen) to cease a reaction.

However, some are working towards building up your immune system to tolerate peanuts.

The Need for Treatment

Parents and children all across the country live in constant fear of a rare yet deadly allergic reaction to peanuts. Within the U.S., almost four children die because of a reaction to peanuts. While rare, this fact is enough to keep any parent on edge. Even if it doesn’t lead to death, it can result in permanent brain damage.

Many parents are pushing to completely ban peanuts from all schools and even public places. However, avoidance may lead to more peanut allergies and, even worse, more severe reactions.

From 2008-2012, the number of emergency room visits because of anaphylaxis more than doubled. Peanut allergies in the U.S. more than tripled between the years 1997 and 2008. They rose another 21 percent since 2010, too.

Your immune system needs to come into contact with peanuts at a young age to build up a tolerance to them. If not, the reactions are often more violent. Parents should feed their children peanuts in small doses at a young age.

Because of this rising prevalence in peanut allergies, the Food and Drug Administration (FDA) is currently considering a new, controversial treatment.

The Evolution of Peanut Allergy Treatment

As we have mentioned already, there is no treatment for peanut allergies. Doctors simply advise their patients to avoid peanuts entirely. They prescribe them an EpiPen and teach them how to inject themselves in moments of severe allergic reactions. Those living with a peanut allergy currently live in constant fear of the potential risks they face every day.

However, there are those working towards tempering these fears. Their idea is to reprogram your body’s immune system by giving you peanuts. Sounds counterintuitive, right?

Healthcare professionals use this form of treatment to treat pollen allergies. Known as immunotherapy, a doctor gives a person a shot for pollen, which injects bits of the protein into you, allowing the symptoms to improve.

There was a similar attempt to this for peanut allergies in the late 1990s. An injection of liquid peanut extract was used on patients with this allergy. Unfortunately, the trials were stopped when a patient died of anaphylaxis, reportedly due to a labeling error. While this did halt progress in this field, it eventually found its way back.

During the 2000s, scientists from Duke University rekindled this field by publishing proof-of-concept studies. These studies found that the allergies of mice that were given microscopic amounts of crushed peanut decreased.

This got the researchers excited about the potential for humans.

In 2011, influencers in the world of food-allergies met in Boston to discuss moving forward with this concept. Food Allergy Research & Education, or FARE, hosted a retreat for anyone from patient advocates to regulators and industries. They all agreed that to study this oral immunotherapy safely, there needed to be a standardized product.

It was difficult to figure out what type of product this would be. Manufacturers don’t typically make this kind of drug. However, the product also wasn’t food either. It was just peanut flour.

Eventually, FARE went on to help found a company known as Aimmune to create the product. Aimmune was technically a pharmaceutical company, yet its specialty was creating food-based treatments. These drugs are known as biologics, which are regulated by the FDA. The developers of this product merely just filled a capsule with peanut flour.

Researchers tested the product on two groups of about 250 people who all had a peanut allergy. They would either take a peanut pill or a placebo daily, while researchers constantly monitored them over the year.

To close the experiment, the participants ate small portions of peanut, gradually increasing to almost two peanuts. The researchers measured their reactions accordingly. The majority of those in the placebo group had a reaction before they reached the full amount. However, about two-thirds of those in the peanut pill group could safely eat two peanuts. These findings were published in The New England Journal of Medicine in November 2018.

Aimmune is now petitioning the FDA to approve their product as a drug called Palforzia. They do not promise to allow allergic people the ability to eat peanuts, but rather protection from small, accidental ingestions. Experts predict that patients will need to pay $4,200 a year for this drug indefinitely.

Aimmune believes their sells will reach one billion dollars. They also assure investors that insurance companies have agreed to cover the drug.

Thomas Casale, FARE’s chief medical advisor and professor of medicine and pediatrics at the University of South Florida, responded to a question asking why other companies couldn’t just sell the powder as a dietary supplement.

Casale responded by saying that insurance will cover the process of doctors prescribing the drug and their reimbursement. Without it, practitioners have to pay out of pocket for oral immunotherapy. This makes the price too high for patients to access. By putting the drug into the system, Casale implies, it will become more accessible.

Many believe that this drug will be rapidly accepted, but Jeff Tice, a physician and health-policy analyst at the University of California at San Francisco, believes it isn’t ready to be approved.

There was information that was not focused on in the content published in The New England Journal of Medicine. It was found that the people who took the drug also reported higher rates of severe allergic reactions, almost six times more. In the real world, they reported 14 percent systemic reactions compared to just three percent in the control group.

Back in April 2019, The Lancet conducted a meta-analysis that found the same thing. Their results showed that peanut oral immunotherapy increased the likelihood of allergic and anaphylactic reactions. Avoidance and placebo treatment were much more effective.

The FDA states the drug’s use as “to reduce the risk of anaphylaxis after accidental exposure to peanut in patients.” However, this treatment does the exact opposite and increases the risks.

The fact that this drug is being pushed so hard shines a light on a bigger issue with the production of drugs. The FDA has loosened its standards when it comes to the evidence required that support a product.

Palforzia does not extend people’s lives nor does it protect you from severe allergic reactions. However, some believe that if this first product were not to be approved, it would set the field back. Others think that approving a drug that harms people would also set it back.

Drugs are constantly being created and approved that pose a threat to patients. You may have to take a certain drug to help with a specific condition, but the product you use has side-effects you were unaware of. This can even lead to fatal results. If you have been the victim of dangerous drugs, do not hesitate to contact Wormington & Bollinger.